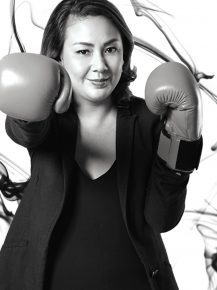 Jenny has the uncanny ability to arrive early in the office, even after staying up all night. Some say it’s due to a career that started in the heart of Manila’s nightlife scene. Other say it’s because of her good diet—after all, she runs a couple of award-winning restaurants, and have launched countless more.

Her attention to detail shows in her PR work, whether she’s organizing charity dinners or launching the next food destination. It’s a trait she developed over the years as a passionate entrepreneur who started at an early age.

She lives for experience. But not even the weekend can stop her from crunching numbers, which can take the form of kilometers run, laps swum, or the amount of air she has left when she goes SCUBA diving.